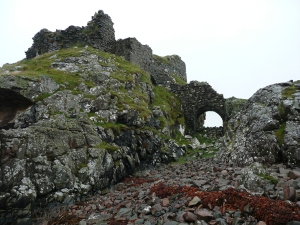 The closer I got to Skye, the more I realized how much I was dreading this part of the trip. Sure, it was a long walk to what would probably turn out to be nothing, but surely a pile of rocks and a rainstorm weren’t that scary.

I saw my first hooded crow as I got off the ferry in Stornoway. I didn’t know what the creature was. It hopped like a crow, it was shaped like one,  but a gray-bodied crow? Crows and ravens had been scaring the pants off my partner and I since before I left for the trip, and sure enough, once again there were three hooded crows, not two, or five. We found out a day or so before I left that both of us had been keeping our mouths shut about this fact, so as not to scare the other. Once again, I told the Morrigan that if she wanted me, she would have me, but I hoped to make it home.

Two mornings after I was walking around Portree on Skye at a ridiculous hour of the morning. I had tea at the only place open, where the people who actually made the town run got theirs, and pulled Grace around town checking out what would be open when and when the buses ran. When the tourist center opened I went in and asked about Dun Scaith. The woman behind the desk didn’t have a clue about where I was talking about, but she knew the island and was more than willing to look things up. Every tourist info center in Scotland was like this, by the way. I am turning over a new leaf and hope to be as helpful when I get back to work in San Francisco. The upshot was, she thought I was a little nuts, but hid it well and wished me luck. She told me to tell the bus driver to let me off at the road to Ord, and the walk would be a little shorter. Drivers on the islands will let you off and pick you up almost anywhere they pass by, which was a blessing indeed.

I ended up standing on the road to Ord at about 10:30, thinking that this was another fine mess I’d gotten myself into. I went through my pack for some trail mix and came across a camping meal I’d been given back at Anderida camp. Beanies and weenies. I ate it all, even though I didn’t particularly want it, knowing I needed the fuel and blessing the wondrous soul who’d given it to me. I repacked Grace and pulled out my little flashing light to attach to the trailer. The mist was closing in and the road to Ord was one lane wide. I kept my ears open and was ready to leap to the side at any minute. I remember telling Scathach I was coming to see her, knowing that was a little nuts, but also knowing on some level that it was only manners. I also gave myself permission to take a ride if it was offered. I wasn’t expecting anything, but I was willing…

The first car that passed me stopped, backed up, and offered me a ride. They were holidaymakers, just like me, and I climbed in back with their baby girl, who got over her fear of the stranger in about two seconds. We proceeded to have a lovely drive up the road to Ord. They drove me literally to Dun Scaith. They didn’t know where it was, and didn’t mean to do so, but on one of our numerous stops to see the gorgeous scenery there it was. They didn’t want to come across the field of sheep with me, which was probably wise, and a blessing on them and their house for being my magic bus.

I manhandled Grace across the sheep field. There were a couple of signs pointing the way to “the castle,” but they were just signs the landowner had put up. When I couldn’t drag her any farther I left Grace beside the path, her rain cover firmly in place. Good thing. The mist got heavier and heavier. I got to the castle, and even took a few pics before the rain started, and with it the wind. OK, I thought, the rain has been off and on since I got here and it has always cleared in about twenty minutes. The bridge had been the first thing I investigated, and, how appropriate, the bottom had fallen out of it. A salmon leap was needed. I tucked myself into a corner of the bridge, out of the rain and almost dry, and waited. And waited.

After a bit, I put myself in a meditative state. Seemed the thing to do. After a bit, I started to hear music, tunes I had never heard before. I admit that for a moment I was crazy with the knowledge that it was too wet to pull out my iPad and try to sing them into the device, but I got over it and just listened. Maybe I was nuts, maybe I wasn’t, but Scathach asked me my business, and asked me for the songs I’d written that would go next to hers. I gave her a song, then another. She invited me in. I tried, but I couldn’t find a way up the hillside that would’t result in a broken leg or worse in that storm, and I had miles to walk to get to Armadale. She kept inviting me in, and wouldn’t take any excuses. She asked me of the tales I knew of her. To my great embarrassment, I couldn’t tell her. I knew they involved Cuchullain, and she only figured in them in relation to him, but I started to tell her–and couldn’t finish. I’d read the Fourth Branch of the Mabinogi repeatedly, but hadn’t even thought to reread how Scathach trained Cuchullain.

She laughed at me. She did a lot of that and who could blame her? I was sent back to bardic preschool. Learn the tales known of her, and make her a song based on them. Come back, sing it, and come inside, and then we’ll see about other stories.

In the end I had to leave. I needed to get to Armadale while I could, and the rain wasn’t letting up, nor the wind. The waterproofing on my boots failed on the way back through the field. I was sloshing by the time I got to the road, but the rest of me was fairly dry and I was warm from the walking and confident I would remain so. Sleat was beautiful, almost Otherworldly. Birches, hazels and rowans lined the side of the one lane road, the beach and the wild ocean on the other. I stopped often to take pictures, and as the road wound up and down the hills I clipped the flashing light to the back of my sou’wester and pushed the earflaps off my ears. If there was a car coming I wanted to know it!

I was a couple of miles down the road when I came across the road crew. I was wet and swearing by now. The rain and the walk I could deal with cheerfully, but the wind was too much. I could stay warm, but my skirt was soaked to the thighs and my boots were wet inside as well because the duster only snapped to the knees. Walking in the wind of course made it ride up considerably. I couldn’t see the mirror of the first truck, and so I knew he couldn’t see me. He was cleaning out the turnouts with a streetcleaning brush off the side of the truck. I maneuvered myself to where he could see me and waved my arms till he stopped and let me by, quite sweetly, actually. I asked him how far it was to Armadale and his jaw dropped. The second truck drove up to me. I’ll bet there was a radio involved. A beefy black-haired guy cranked down the window, smiled at me and asked me if I had a screw loose. I gave him a big smile back and said yes, I did! And how far was it to Armadale?

He told me to go up to the bend in the road, he’d turn around and give me a ride! It was a *lot* farther to Armadale than I thought. Along the way I learned a lot about the bus system, which only runs as far as it does during the season. It’s there for visitors, not locals. I also learned about the road work on the island, and a thumbnail view of the daily life of the area, things I never would have learned anything about otherwise. Not once was the word “tourist” used, and all of his information was just that, his point of view, delivered with wit and a complete lack of malice. I wanted to buy him the regulation pint, I would have loved to have sat in a pub and continued the conversation, but his crew was shorthanded and it was the middle of the afternoon. He had apologized for the state of te lorry–it wasn’t his and he’d had a time getting the side of it down when he’d picked me up. We shared a smile as he reached over the side and pulled out the same rock he’d persuaded the latch with back on the road.

I know I smelled of sheep shit on the ferry, and people looked at me as if I were from Mars, but I didn’t care. Yes, I failed to make the salmon leap, but I felt as if I hadn’t come off half bad. I’d had quite an adventure, and Scathach had invited me back, after all.

Crows and ravens went back to being their old selves from then on. I don’t know why, neither do I need to.

One thought on “The Shadow of Dun Scaith”